Okay.  This is crazy.  But remember how I posted waaaaay back in JULY about "Hermie" (Puddin' Pie's BFF's hermit crab) making the big escape while we were crab sitting?  Well, you just aren't gonna believe it.  I know I sure didn't.  But darn if that crab didn't just show up in my bathroom, all strutting crawling around like nobodies business.  He was all like "What? Did you miss me?"  Miss him?!?  Uh, yeah.  I mean I normally don't like wallowing in guiltsville for letting a pet disappear on my watch.   So, to put it mildly, I was stunned and amazed that he was alive.  And that he didn't look any worse for the wear for being without food or water for a couple months.  Here I had been waiting for a nasty smell to come emanating from some unsearched crevice, to finally announce poor Hermie's final location.  Instead we very happily toted him across the street for a joyful reunion with Ev and Hermie 2 (the replacement we bought so there would at least be a crab in the pot, so to speak).

Who'd have thunk it so?  I was just so relieved not to have the slow demise of Hermie on my conscience any longer.  Even though I know he is "just" a little hermit crab, he is Ev's pet.  Ev trusted us to take care of him.  And having to explain to him what happened on our watch was a tough lesson for Puddin' and Wou (and me too).  Although, with the faith that only kids have, Puddin' stayed convinced, convicted even, that Hermie 1 would return.  After all, he prayed for him.  Every day.  So when he oh. so. happily. returned Hermie 1, he made it known that God had answered his prayers.  The look on his face was priceless.  The joy in his heart was palpable.

Wow.  What a lesson for me.  That the God who will look after a lost hermit crab and uphold a little boy's prayers is also the very same God who looks after me.  Every single time I get lost.  And sometimes, that happens more times in a day than I can count.  And I'm just one of an uncountable number that He looks after.  Unfailingly.  Unceasingly.  Even when we choose the path that we know will get us lost.  My God, who even looks out for lost hermit crabs, surely looks out for ALL of us.  I'll leave with these words from Luke 19:10   "For the Son of Man came to seek out and to save the lost.”   Amen.
Posted by queen bee tracy at 7:36 PM

OMGosh, this would have totally freaked me out Ÿ Glad you found him.

Thanks for visiting me over at Pittypat Paperie and leaving the nice comment. Hope you can drop by again sometimes. 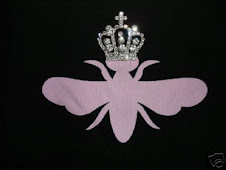 queen bee tracy
i'm an optimistic pessimist (preparing for the worst but always hoping for the best) with an off kilter sense of humor. my favorite color is pink. i'm so grateful to be covered by God's grace. i love almost everybody and for the ones i don't quite love? well, i'm trying to work on that.